Skip to content
Today we have celebrated World’s Traffic Crash Victims’ Day at Abet Hospital by visiting the victims.
Abet Hospital is a hospital that receives traffic injury victims in Addis Ababa. We commemorated the day with a traffic crash victims by lighting candles, for citizens whose lives are gone, where the hospital’s medical director of administration as well as doctors and nurses attended the event. A variety of programs have been implemented at the ceremony, a pledge signing ceremony and a prayer program.
Speaking at the opening ceremony , Save the Nation’s Executive director, Mr. Mesganaw Bimrew, stressed that the participation of all parties is crucial in reducing the severity of traffic accidents and that citizens need immediate first aid in an emergency. Remind the audience and the hospital that it is important to increase the number and scope of ambulance vehicles for emergency treatment in the event of a traffic accident. He also said that he believes Save the Nation is contributing in reducing the pressure on hospitals by doing its part and pledge will continue this in the future.
At the end of his speech, SNA director have made inquiries to the hospital for collaboration on information-sharing and data partnerships.
Next, The hospital’s medical director also expressed his joy at being on Memorial Day to remember the day because traffic is a type of disaster that requires all kinds of effort, he said the problem is rooted and hard. He said he is also ready to work with traffic safety mitigation teams of Save the Nation in the future. Finally the program was completed, with a candlelight ceremony and signature ceremony.
Thank you to all of you who helped us make this Memorial Day, and we especially appreciate the support of the US Chamber of Commerce in Ethiopia. 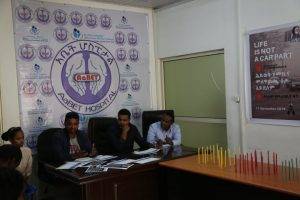 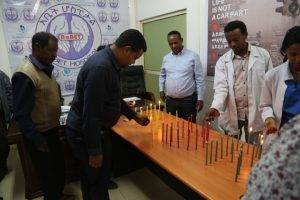